Two boats does not a fleet make – butÂ it does make a Squadron!

Added a new boat this past week.Â  I occasionally check Craigslist for Sailboats and the other day I found another Force5 listed.Â  This boat was located down in Sierra Vista and I was not about to make a run that far to look at a boat.Â  Emailed the owner and asked if he ever came up to the Phoenix area.Â  He replied that he was headed through here the next day on his way to Flagstaff.Â I told him no promises but I was interested.Â  The next morning at 6am here was at my door.Â  Bought the boat and trailer for a reasonable price.

The hull number on this boat isÂ AMF18992M74I.Â  Which means that this boat was built in September of 1974.

The lines for the Cunningham andÂ the Downhaul were missing while the line for the Vang is too short to be useable.Â  No big deal.Â  I’ll make a quick trip to West Marine to replace all the lines with new and the boat should be ready for a shakedown cruise out to Tempe Town Lake.

Next up will be to build a top bunk on the trailer to carry one of the boats inverted (deck-to-deck) with some support bars between the boats to cary the masts and booms.Â  Then I can sell theÂ  bigger powerboat trailer that the Red boat is currently sitting on. 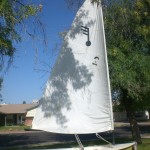 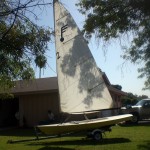 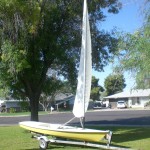 I’m doing a small boat sailing class for the Scouts in our Ward (about 5-6 of them).

First night was this PowerPoint presentation I did (includes some videos).

The second night I towed the boat over to the Church and we carried the Hull, spars, sheets, sails and rigging into the Cultural Hall with the idea of rigging the boat in there since it was dark outside and not having to worry about any wind grabbing the sail.Â  Ended up that the ceiling in there was not tall enough to allow the mast to be raised!Â  Missed it by about 3′.Â  Did as much as we could in there then hauled it all back outside and fully rigged the boat on the trailer under the parking lot lights and there was no wind to speak of.

This afternoon the Scouts are coming over here to the house and we are going to put the boat in the pool and have them practice capsizing and righting the boat.Â  Figure the controlled environment here along with close proximity to “shore” with towels, our firepit and glasses of Hot Chocolate will make for an easier time.

Then when we go to the Lake to actually sail we won’t have to work on that exercise and can just sail the boat instead.

Sailing – Back on the water

Years ago (ok decades ago) I used to sail a Force 5 sailboat made by AMF around the Savannah. GA area.

For the past many years I have been racing and instructing high performance driving but have always harbored the idea of getting a sailboat.Â  Since the wife gets motion sick (even gets queasy in elevators) it does not make much sense to get a big boat so I have been casting about for a Force 5.Â  I’ve looked at a few but they were either too beat up or the price was too much.

Finally found one that ended up being less then 4 miles from my house.Â  Hull # AMF15360M76G

A Force 5 is the same size as a Laser (boat used in Olympic competition) but whereas the Laser only carries 76 sq. ft of sail a Force 5 carries 91 sq. ft.Â  Quite a bit more sail and therefore more speed. 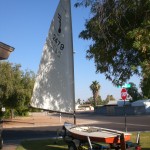 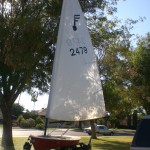 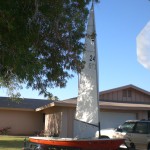 Cool video of Laser’s at speed