I know that headline is repetitive.

The New York Times blogging Economist and noted Cat fancier Paul Krugman took after the “Right-Wing” in general and Palin in particularÂ as being a root of cause for the sick individual that shot Rep Giffords.

Krugman should have stopped at his opening line.Â  “We donâ€™t have proof yet…”Â  Anytime someone then presses on despite warning you up frontÂ that they are going to proceed to talk out of their ass you can be sure that the smell generated from their thought processes will carry a familiar stench.

KrugmanÂ proceeded to jump in the pile of shit that he was wanting to rub the Conservative nose in by daring to put the following words to paper.

“But violent acts are what happen when you create a climate of hate. And itâ€™s long past time for the GOPâ€™s leaders to take a stand against the hate-mongers.”

Hey Paul, let me draw your attention to another missive that you conjured from the depths of yourÂ schizophrenic mind.Â  This time from 9/10/2008.

Notice anything about the photo you used? 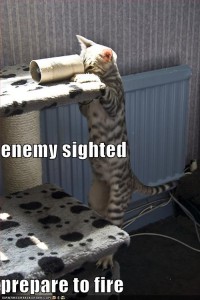 Maybe you do suffer from a ?

My advice to you Paul…Â  Stick to economics.Â  That way you can limit being so wrong to just a single subject. Or better yet.Â  Maybe you could get a gig

One Response to Krugman the Hypocrite