Clarkson on driving a Formula Car

As someone that drives and races a Formula Car I can attest to what Jeremy Clarkson of the BBC TV show TopGear is saying in this article.Â  It is hard to get people to understand how different they are to drive. 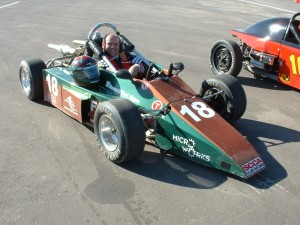 A few weeks ago I pulled the F500 out of the garage after getting it running from it’s long hibernation being on display over at F1 Race Factory.Â  So I push the car into the street.Â  Climb in, strap the car on (you wear a Formula Car) and fire it up to make sure it’s working by taking it into and around our cul-de-sac.Â  FYI: the transmission of an F500 is setup so that it will not even engage the clutch until you hit 5000 RPM – just to move the car under it’s own power from point A to point B is like a drag racing hole shot.)

Step on the throttle and watch/listen to the RPM climb up from an idle of about 1,500.Â  Finally, as the revs hit 5,000 and the car realizes that I’m serious about wanting it to move it launches itself.

Because the street was cold as were the rear tires I immediately had to feed in an armful of steering to keep the car pointed down the street since the rear end is stepping out propelling me down the street sideways.Â Â  When the spinning rear wheels finally “start” to get some heat and hook up the speed increases as I straighten the wheel just as I need to turn hard right to navigate into the cul-de-sac.Â  Of course the front tires have no heat in them so the car just pushes/understeers/plows straight ahead.Â  I had wanted to go round the cul-de-sac toward the left.Â  Ended up having to go round toward the right since the front end didn’t bite until I was well past the entry to the cul-de-sac…

As we know, stag nights are terrible things that cause perfectly normal men to be sick and push root vegetables up one anotherï¿½s bottom. So imagine my delight when a friend announced recently that his stag do would be alcohol-free. ï¿½Yippee,ï¿½

I thought. ï¿½I shall be able to come home with a full complement of pubic hair.ï¿½ Then I discovered why there would be no drinking. Because it was a ï¿½driving dayï¿½.

One of the other guests, a public-relations man of some repute, couldnï¿½t understand why I was so harrumphy. ï¿½Well, dear boy. It would be a bit like inviting you to spend your day off pretending to like journalists. Youï¿½d be a bit harrumphy too.ï¿½

Iï¿½d heard all about these track days, of course, and none of what Iï¿½d heard was very encouraging. Rubbish cars on their last legs. Lots of cones. Two hours of safety lectures. Four hours of hanging around. Ten minutes of driving. Undrinkable tea. Wilting biscuits. And a million rules about overtaking, none of which says: ï¿½And if the bastard doesnï¿½t move over, ram him.ï¿½

Happily, however, we went to Jonathan Palmerï¿½s gaff on an old airbase near Bedford, which is about six days away from everywhere else in the British Isles. Jonathan seems to know that people donï¿½t like waiting four hours to drive a Maestro. Which is why, five seconds after arriving, I was behind the wheel of a Caterham.

And then, after 10 laps, we were whizzed in luggzury 4x4s to another track, where we did 10 laps in some Renault Clio touring cars, and then it was Porsche 911s and then it was a funny sort of miniature Le Mans racer. And then we were dipped into Nomex, asked to put on some driving slippers and slotted into the single-seaters.

The instructor asked if Iï¿½d ever driven such a thing before. ï¿½Of course I have,ï¿½ I replied indignantly. ï¿½I am a presenter on Top Gear and so I have driven everything.ï¿½ But then I started to think. And realised that I hadnï¿½t. Thatï¿½s a bit like Jonathan Ross realising one day heï¿½s never seen Brief Encounter.

Obviously, it wasnï¿½t a Formula One car, but it wasnï¿½t a puny Formula Ford either. It had slick tyres, a 3-litre Jaguar V6, a power-to-weight ratio of 500bhp per ton, a top speed of 170 and easily enough room in the cockpit for anyone up to 6ft 3in. Iï¿½m taller than that but Iï¿½ve been cramped before in exotic cars so I wasnï¿½t even remotely worried about the drive that lay ahead. I should have been.

You hear motor sports commentators talking about the problems of cold tyres and you see all those mechanics draping the rubberwear with electric blankies to keep them warm and you think, ï¿½Oh donï¿½t be so silly. And stop weaving around like that. Cold tyres canï¿½t possibly make any difference.ï¿½

Thatï¿½s why I went barrelling into the first corner only to discover I had no grip at all. Iï¿½m not talking about the rear end being a bit skittish. Or the front washing out. Iï¿½m talking about the steering wheel being completely and utterly redundant. So into the grass I went.

Happily, because the track is in Bedford, you could spin for a thousand miles in any direction and not hit anything, so soon I was off again, imagining that Iï¿½d made a mistake of some sort. But no.

I crawled round the second corner because everyone else was facing in the wrong direction and made it all the way to the third, where I braked carefully, came down the sequential box, turned in gingerly and ï¿½ whoa ï¿½ spun again.

I simply do not know how those F1 boys get round the first lap at all. And, whatï¿½s more, I donï¿½t really have much of a clue about how they do the second, either.

Because, having slithered and spun round the first lap, you slow right down because you simply donï¿½t trust the tyres to work. And that means they donï¿½t get hot.

Itï¿½s catch-22. Go fast enough to warm them up and you spin. Go slow and you have to play the snail until the chequered flag comes down. After several laps, however, of eyebrow-matting concentration, I hit a pigeon. Which was a bit uncomfortable. For it.

Stopping was no easier. Brake at what you think is the right place and you will stop dead about 400 yards before the corner. A car this light has no real mass and, consequently, stops with a panache no road car can match. So you start to get cocky, braking later and later until, eventually, you will lock the fronts. When this happens in a normal car on normal tyres, there is much wailing and screeching. But in the single-seater, on slicks, there is no noise at all. For a while, you sit there, thinking all is well. Then you notice the smoke, and then you realise that you are heading straight for the pit wall at about a million.

Over the years, I have driven many cars, some of them very fast. And in my mind this had prepared me for life in a proper racing car on proper racing tyres on a proper racing track. It hadnï¿½t, though. Itï¿½s like spending your life hiring out donkeys on a beach and then imagining you could win the Grand National.

And then thereï¿½s the question of g. F1 racing drivers talk about how they suffer from the effects of this, and I always feel compelled to drive to their houses and punch them in the face. Because the g they are talking about is lateral. And lateral g is for nancy boys.

In essence, the effects of g are felt in the form of blood moving around inside your body. In a fighter plane it moves up to your head in times of negative g ï¿½ which makes you feel light-headed and sick ï¿½ and down in times of positive g, which causes you to lose your peripheral vision and then die.

In a racing car it can move only laterally ï¿½ from side to side. So itï¿½s not all in your head or all in your feet. It just sloshes from shoulder to shoulder. Which is no big deal … Iï¿½ve always thought.

You see, eventually I did start to push the single-seater, and it was a revelation. Because you can see the front tyres and because they have so much grip when they are warm, you can place the car precisely where you want it to be at speeds you would imagine were simply impossible. All these years, Iï¿½ve scoffed at racing drivers for dismissing all road cars as rubbish, but I began to see their point. I may have even whooped occasionally like an American. And then my neck started to hurt. And then the muscles in it turned to fat. And then, after a couple of laps, I couldnï¿½t hold my head up at all. When I got out of the car, it looked as though Iï¿½d been hanged. Lateral g, then, is unpleasant.

Which brings me to the BMW Z4. To a racing driver, who is used to slick tyres and fish-sharp reflexes, itï¿½s wallowy and slithery and horrid. But to me itï¿½s brilliant. Mostly because you can drive for more than 10 minutes without your head coming off.

I also liked the styling, the ride ï¿½ provided you stay out of the sport settings ï¿½ the engineï¿½s urgency, the fluidity of the responses and the elegance of the interior. Though, that said, this is not a car you can drive in cuff links. Because the centre console is set up for left-hand drive, every time you change gear your silver dog turd, or whatever, will hit the iDrive knob, which in extreme circumstances can cause the cabin to be filled with rap noises.

However, Iï¿½ve thought quite hard about this and can confidently say that the Z4, with its folding metal roof and softer feel, is now the best of the medium-sized sports cars. Certainly, I prefer it to the Boxster and the Mercedes SLK.

However, if itï¿½s a real driving experience you want, forget the ultimate driving machine. Because, as I now realise, it isnï¿½t.