Let’s see if I have this right…Â  Obama is blaming the Republicans for inheirting a $1.3 trillion dollar deficit.Â  Did Bush spend way to much.Â  Yep.Â  Are there lots of things I disagreed with Bush about?Â  Yep.Â  However last I looked the Constitution gives the authority to pass budgets to the Congress and NOT the President.Â  Bush should have used his ability to veto.Â  Especially, in 2008 when he had bascially nothing to lose as far as popular support in running for re-election. 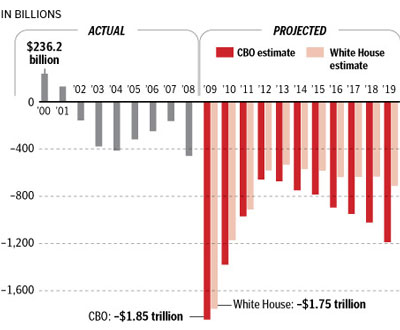 When Bush came into office in Jan of 2001 we had a budget surplus and Republican control of the House and Senate.Â  Then a little thing referred to as 9/11 happened and threw the country into an economicÂ tailspin for a while.Â  We then had to refund the military that had been defunded and reduced in size during theÂ previous Administration (the bogusÂ “peace dividend”).Â  That increased the annual deficits and the debt.Â  But note from the graph above that even while the military was seeing increased levels of funding and two wars were being fought as well as the increase in domestic spending that Bush was doing (no-child, persciptions for seniors, etc…) the deficits began to subside.Â  Then in January of 07 Nancy and Harry along with their cohorts in the Democratic party came to power in the Congress.Â  The branch of government that controls spending.Â  Note the dramatic swing in spending for 08 when they got the first budget they completely controlled.Â  Hmmmmm.

Check out the Budget for 09Â with the Spenders controlling both ends of Washington!Â  Sure Obama says that by the end of his first term he will have cut the deficit in half.Â  Pretty easy to do when you first blow it out by quadrupling it.Â  Half of that is still double what it is today!